Everything You Need to Know About the 2019 Silverado! 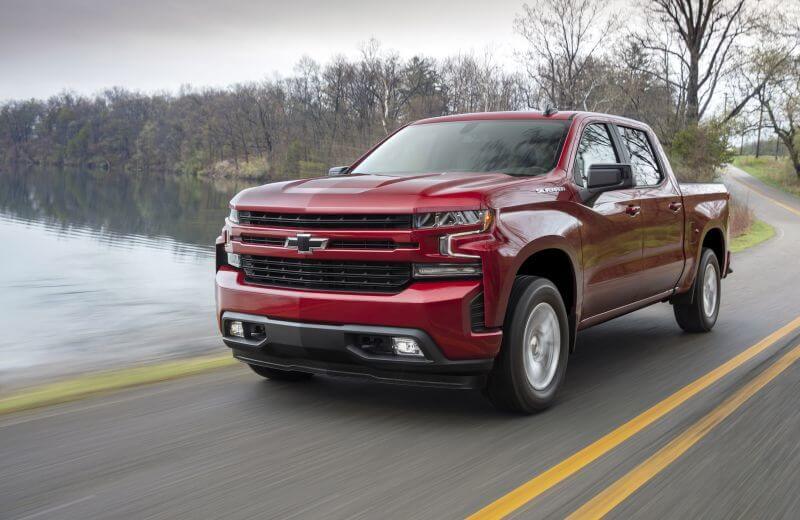 The upcoming 2019 Chevrolet Silverado is an aggressive step forward for Chevrolet. It’s got a bold new look and tons of tech, both under the hood and in the cabin. But Chevrolet hasn’t forgotten its roots. With everything that’s different in the 2019 Silverado, it’s still managed to hold on to what we’ve loved over the years. Here are the five things we’re most excited for with the 2019 Chevrolet Silverado! 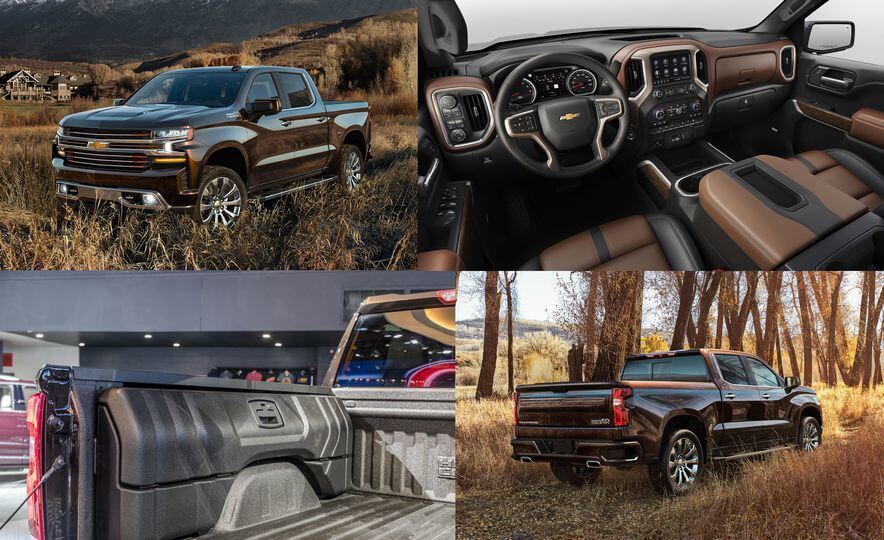 There are plenty of changes inside and out on this years Silverado.

Chevy clearly wants to make a statement with the fourth-generation of Silverados. While the third generation played it safe in terms of looks, making small changes while keeping the same blunt, square look that’s long been the face of the truck, the 2019 model switches it up, going for a sleek, modern look with swooping, angular curves that look more reminiscent of the Colorado. It’s a fresh face full of swagger that still manages to feel right at home in the Silverado lineup. The new look is bound to be a bit polarizing with some Silverado faithful, but we’re confident most people will warm up to it rather quickly. We certainly have!

We’re all in on the new look!

The 2019 Silverado has managed to shave up to 450 pounds while managing to also be larger (weight comparisons are made between crew-cab V-8 models). It has a wheelbase that’s as much as 3.9 inches longer than the 2018 trucks and casts a shadow 1.6 inches longer. While these aren’t breathtaking differences, the fact that Chevrolet managed to increase these numbers at all while cutting the weight by almost 500 pounds is impressive. It also sits an inch higher while managing a 7% improvement in aerodynamic efficiency thanks to the new face. The frame is divided into smaller chunks and built using several different grades of mild to ultra high strength steel, allowing the frame alone to lose 88 pounds. The 2019 Silverado also uses steel for its roof, fenders and bed while reserving aluminium for its hood, doors and tailgate. 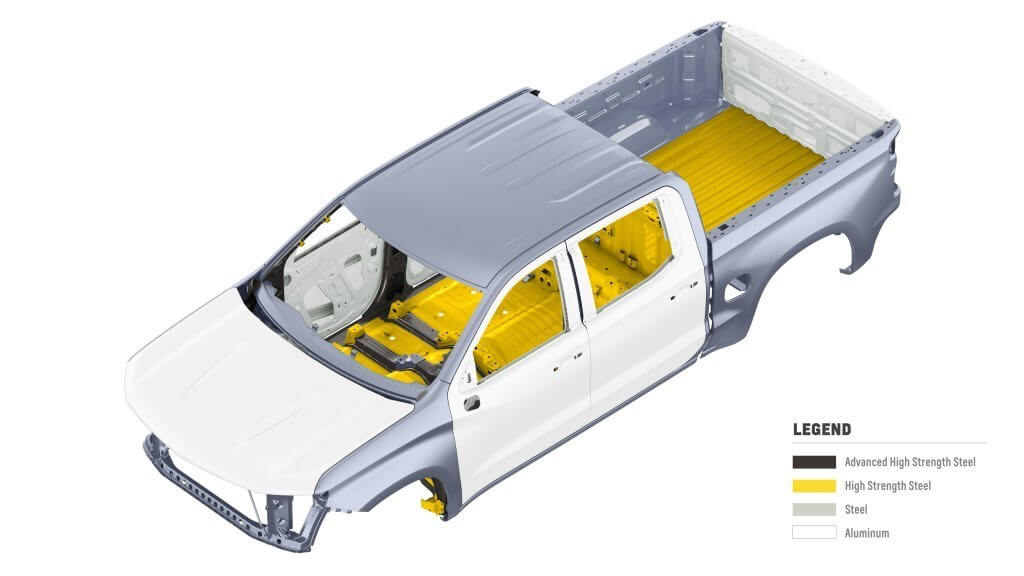 Where the size difference is most noticeable though are in the beds. Coined the ‘Durable’, Chevrolet has widened the floor by almost 7 inches across all three sizes of pickups. This means that the 2019 models bed has increased its volume by 23%, giving it 20% more volume than any of the Silverado’s competitors. The long box jumps from 75 cubic feet to 89, while the standard and short boxes are up 10 cubic feet to be 72 and 63. The steel bed is stamped in as two pieces, making it 1.5 times stronger than the 2018 version and has 12 stationary tie-downs that are double the strength of the previous years truck. 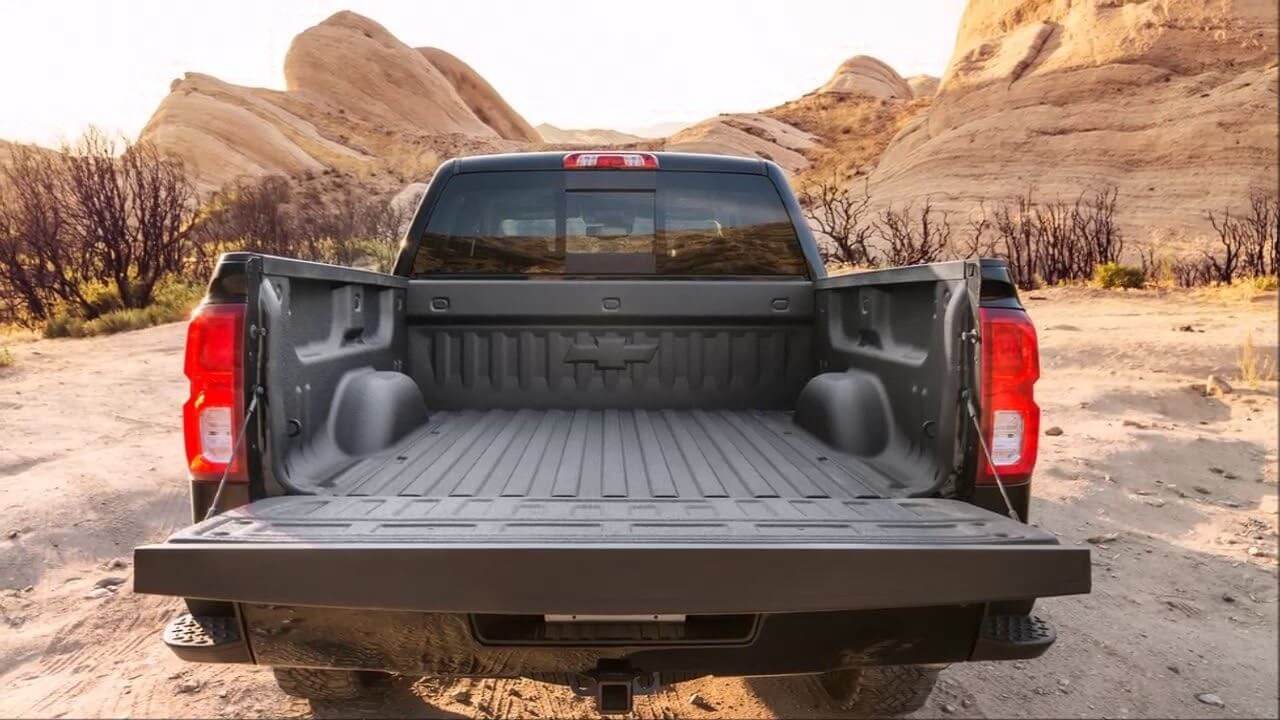 The 2019 Silverado comes standard with a 7-inch touchscreen that can be upgraded to an 8-inch. The familiar MyChevrolet infotainment system comes with everything you’d expect and a few upgrades, the most interesting being the towing feature. You can get up to 4 cameras on the truck that makes it easier to see how close your hitch reciever is to your trailer as you align the two A new infotainment system app lets you track fuel economy and transmission temperature while towing as well . On the safety front, there’s lane-keep assist with lane departure warning, low-speed forward automatic braking, forward collision alert, front pedestrian braking, rear cross traffic alert and a variety of cameras to help with parking. 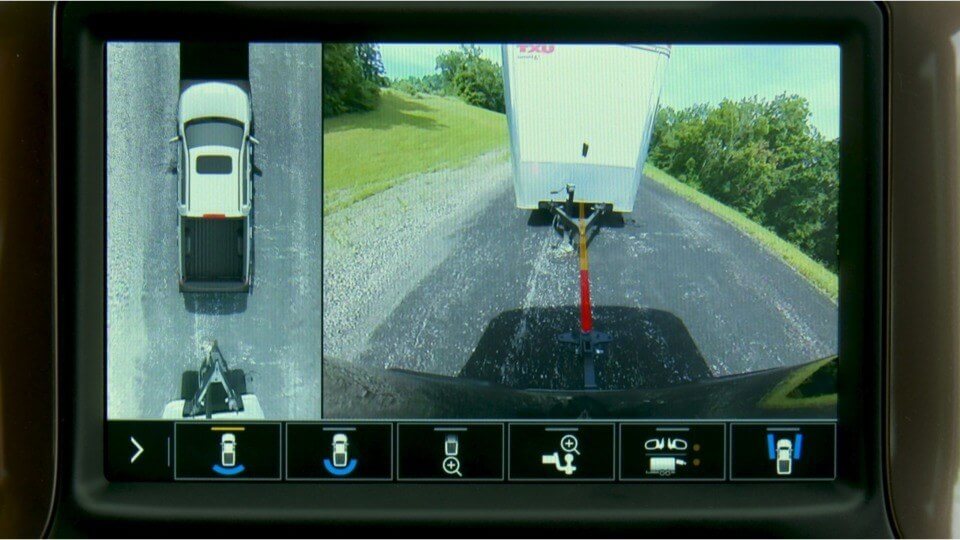 Chevrolet has put a focus on convenient towing and hauling this year.

The extra bed space also carries over to the interior. The rear seat has 3 more inches of legroom, going from 40.9 to 43.9 inches, just shy of the 44.5 inches the front has. Along with the extra legroom, Chevy has managed to squeeze in two large storage bins in the rear seatbacks, as well as storage space under the rear seat bottoms. It’s one of the only pickups we’ve sat in where the rear seats are as comfortable as the front. 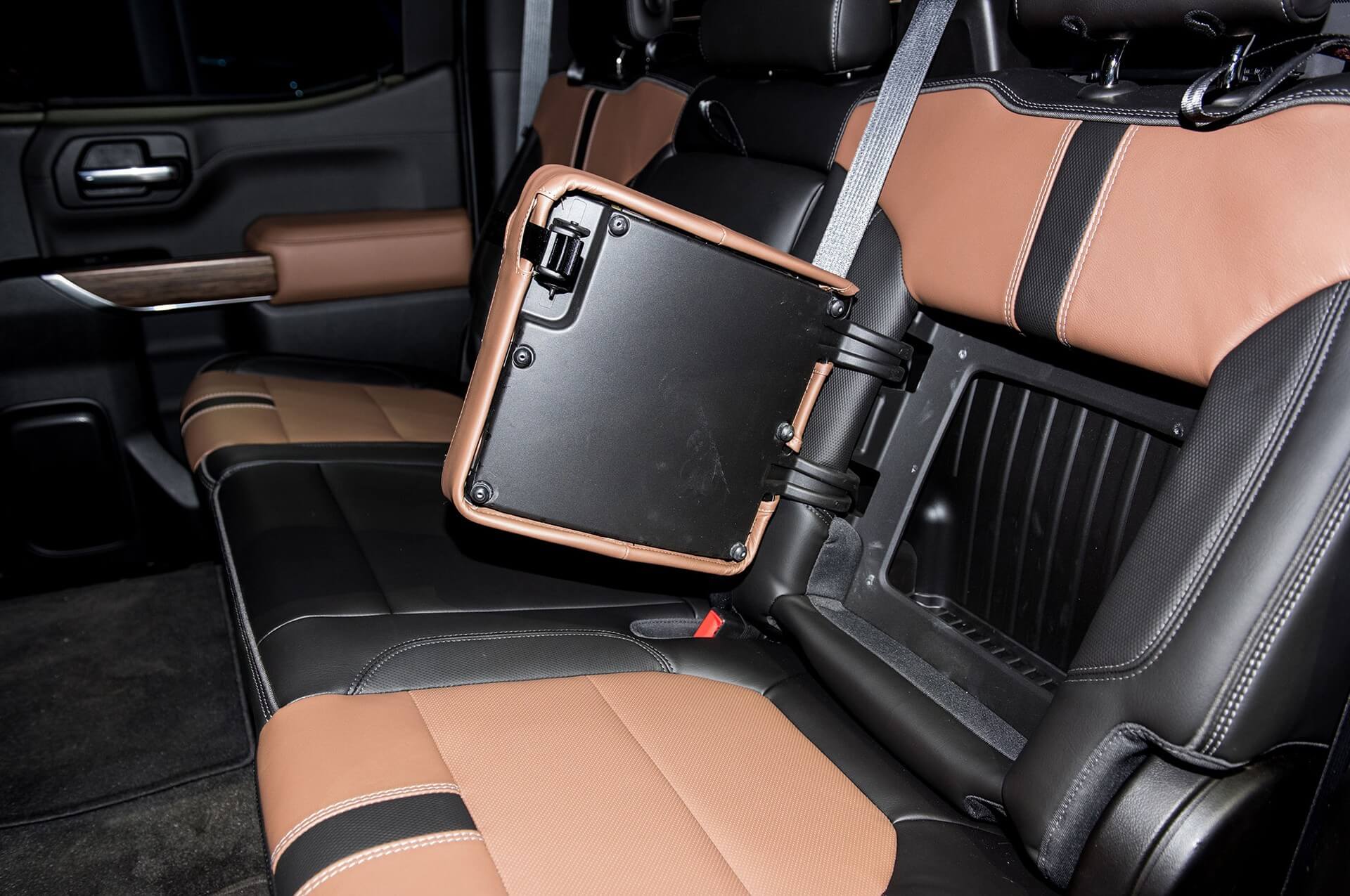 It may be the only pickup where passengers will fight for the backseat.

As for the front half of the cabin, considering the bold new design of the exterior, it seems very familiar. There’s a good reason for that though, Chevy clearly subscribes to the ‘if it ain’t broke, don’t fix it!’ philosophy. The similar cabin is very much in response to buyer demand. Instead of redesigning the interior that was ranked highest among competitors by focus groups, Chevrolet made small design changes aesthetically to fit the new visual look of the exterior. In short, if you spent any time at all in a 2018 Silverados interior, you’ll feel right at home in the 2019 model. 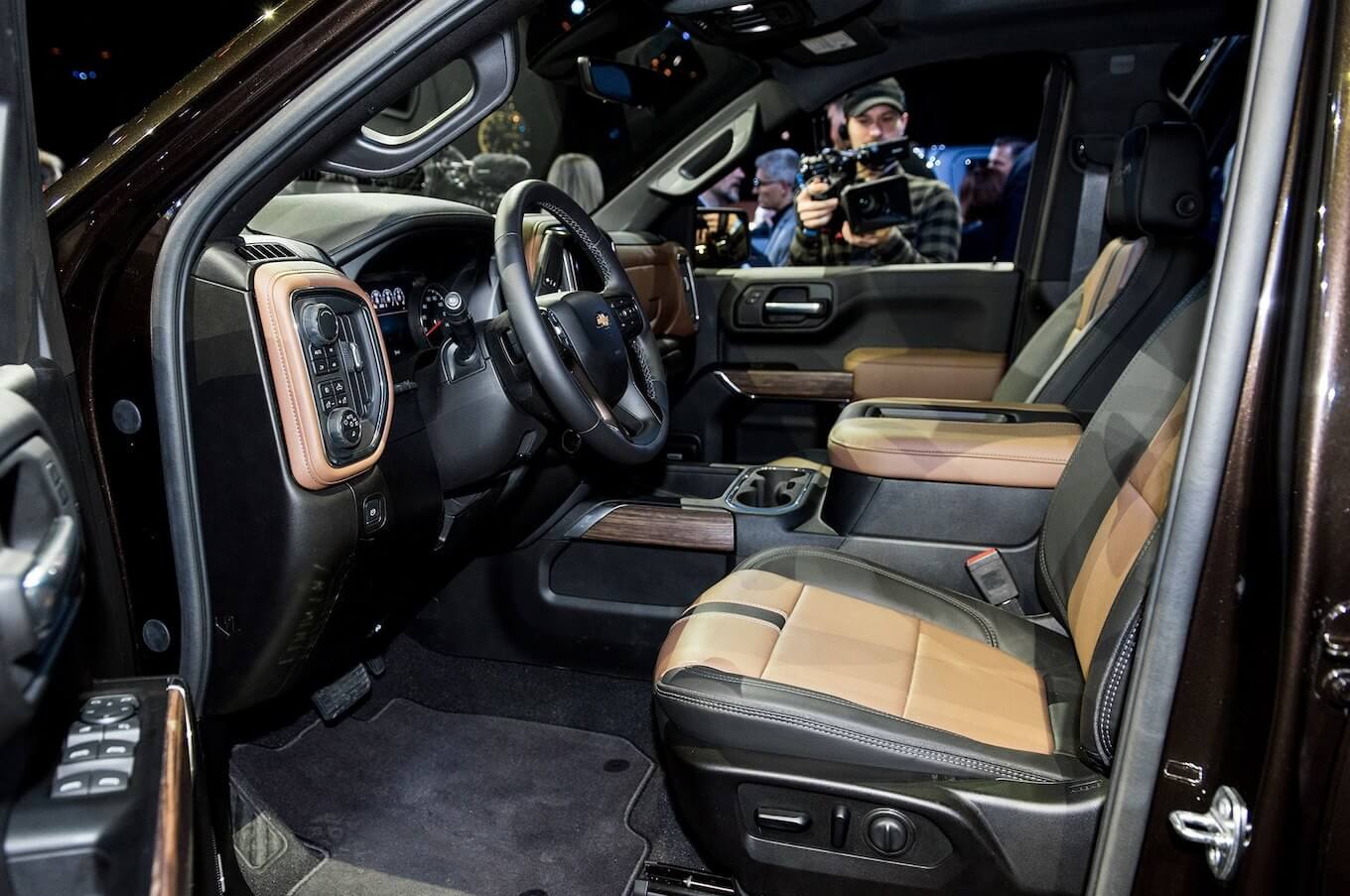 It’s easy to get lost in all the tech and appliances being built into trucks these days, but what’s under the hood is still the most important part.  The 2019 model adds two new engines among the now six available. A 2.7-litre, inline turbo four with Automatic Fuel Management goes on the LT and RST trims. The 5.3-liter V8 with the new Dynamic Fuel Management and a 10-speed transmission comes with the LTZ and High Country trim lines. The new Dynamic Fuel Management System (DFM) is the highlight though.  Similar to GM’s current Active Fuel Management (AFM), DFM deactivates cylinders to match the amount of torque that the driver requests. But while AFM deactivates the same set of cylinders each time, two on the V6, 4 on the V8s, DFM has the capability to deactivate cylinders individually to more closely match the driver’s request, being more efficient while not sacrificing any power. According to Chevrolet, DFM is 9% more efficient than AFM. The new engine generates 22% greater torque and sheds 172 kg from the 4.3-litre v-6. It goes from 0 to 100 km/h in about 7 seconds. 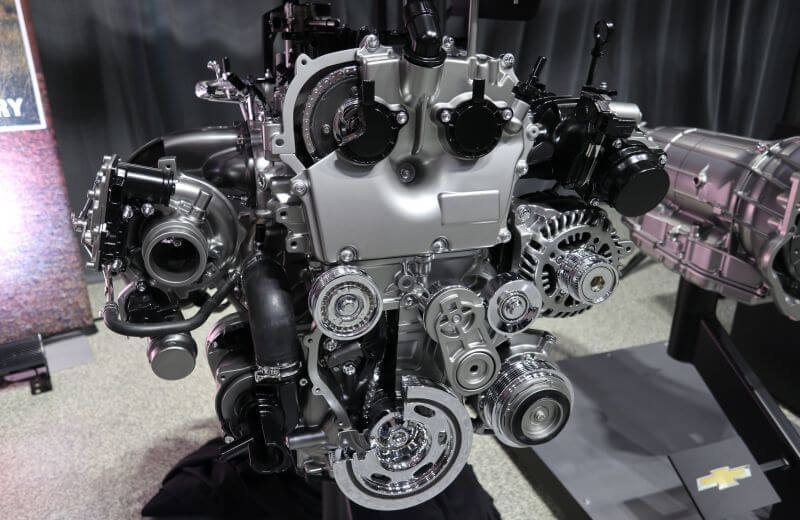 While the new design is bound to scare off the close minded, there is plenty to be excited about with this new iteration. We may be a little biased, but color us impressed!

Prices listed are per day. We also offer 1/2 day rentals. 300km included per day in the prices. A major credit card is needed in order to rent any vehicle. Please call us to ensure vehicle availability. Although we work with all insurance companies, pricing does differ from regular pricing for each insurance company. If you are renting through insurance, please call us at 306-825-7368 for the most accurate pricing.